Those of you who follow me on Twitter will know we celebrated a little this weekend. It’s 4 years since we met Boyo! We decided to celebrate meeting day rather than moving in day as that is rather too close to his birthday.

4 years ago, on another blog I wrote the following…

‘We went to the adoption agency offices this morning to plan out the next couple of weeks. We had some formal stuff to go through, and promises of reports and life story book came from boy-o’s social worker, but both us and his foster mum wonder whether it will actually happen. We have planned our meetings with boy-o until next Tues. Because the foster mum has other children, one of whom is having an operation next Wed, we are having a review meeting next Tues, and then will plan from that point!

Having done that this morning, this afternoon we actually meet boy-o. He started off shy, and not at all happy, but gradually he started to come round a bit. After about 20mins, he ended up looking at the book I made whilst sitting on my lap – which I have to say was a truly amazing experience, not having a little boy sitting on my lap, but the fact that this is our little son.

We built towers of stacking cups and knocked them down. He spent time emptying my handbag. He spent time with M, again sitting on his lap looking at the book, but also playing with other toys. We looked at the photo of our dog, and decided that dogs go ‘woof’.

When we left boy-o said ‘Good bye’ and ‘see you’. And it’s nice to know that in the morning, we will spend more time with him.

I can’t explain how happy I feel right now, and I know that I will grow to love this character, who does everything at one speed (fast) and wants to explore and investigate.’

He still does everything at one speed, he still explores and wants to know. But we love him with all his difficulties and issues.

To celebrate he and I made cake…which he decorated 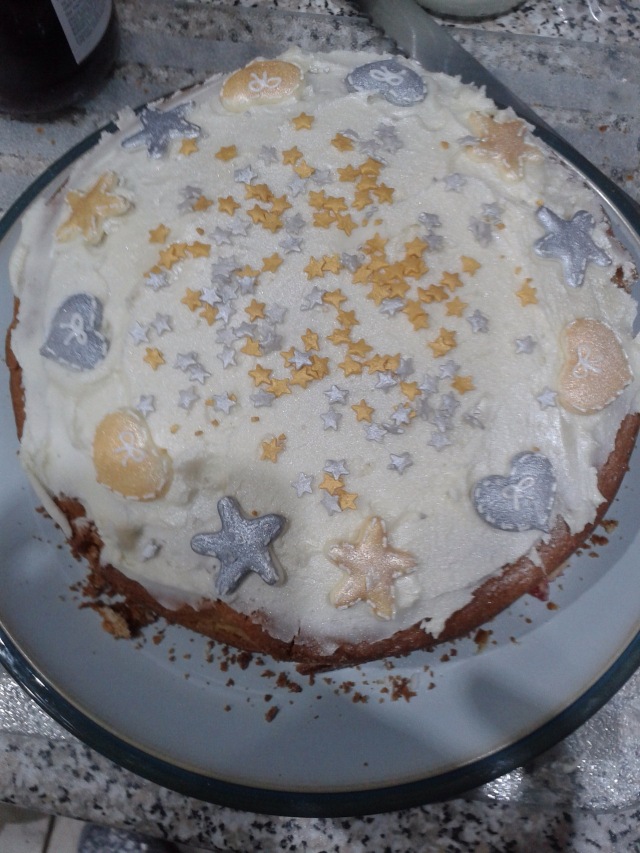 Although my OCD kicked in round the edge…he decided on what decorations he wanted to use from my rather too vast (according to hubby) store and I ‘helped’ him put them on.

Having said all that we’ve had an interesting weekend, as hubby had the flu, jelly has a virus which keeps waking him up and I’ve had little sleep! Boyo has talked, without ceasing, for the entire weekend, or made noise, or shouted or screamed or sang. He paused whilst eating, but that was about it. We have spent a lot of time saying ‘we love you, we know you are there, please use your nice indoor voice’ whilst silently screaming ‘be quiet’ in our heads.

This entry was posted in Uncategorized. Bookmark the permalink.